It felt like old times.  Sifu was cracking jokes.  The audience was standing room only and so was the head table.  A dozen black sashes were on hand to evaluate those testing.  Half of the promotion candidates must have been nervous enough to wet their pants when looking at a table full of teachers, all sizes, shapes, ages and ethnicities, decked out in red from neck to ankles, waiting to rate their performances.  The other half was composed of three red sashes anxious to wear black themselves.  Two of those were my family. 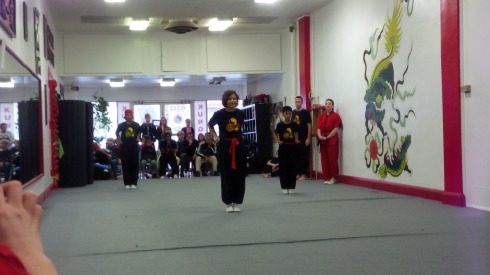 Ava had the best sparring match of her life, fearlessly battling a faster, more strategic opponent, but one much shorter and lighter than she is.  She knocked him down twice with her roundhouse kicks, and she wasn’t even trying.

Then, it was Merle’s turn.  Her opponent was almost a foot taller and almost 40 years younger, but neither of those facts seemed to matter.  The “old lady” put the kid to shame.

The black sash demonstration – the real main event of a day geared toward trying to attract more students – was one of the most entertaining in months.  Aaron gave a near flawless exhibition of 12 Kicks, and I performed White Eyebrow in public for the very first time.  Nerves slowed my pace, but I made no errors.  Both Aaron and I received words of approval from Sifu.

October testing day was the first time ever that all four members of the family performed at the guan on the same day.  We all had a reason to be proud and happy.  It felt like old times… only better.

Journalist and Sifu END_OF_DOCUMENT_TOKEN_TO_BE_REPLACED
This entry was posted on Wednesday, November 5th, 2014 at 1:05 am and tagged with family, happiness, kung fu, lifestyle, martial arts, performance and posted in sports, Uncategorized. You can follow any responses to this entry through the RSS 2.0 feed.
« Family Trait
No Longer Fine »

One response to “Old Times and New”