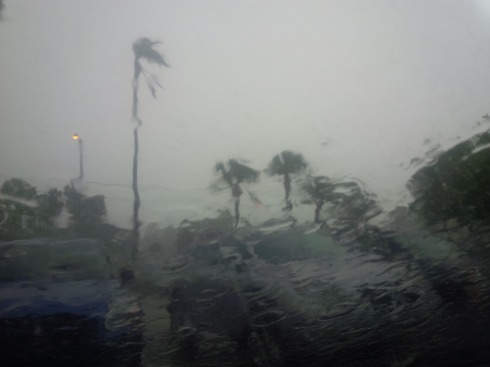 I began this writing from a rental car in the parking lot of a Cracker Barrel.  I was waiting for a morning thunderstorm to lighten up enough for me not to be completely drenched just by opening the door.  It was the tenth or eleventh thunderstorm of the week, including the one we landed in.  I have to drive an hour down the highway to Orlando in a few hours and board a plane a couple of hours after that.  I really need for my departure from Florida to be smoother than my arrival.  That requires an extended window between thunderstorms that have seriously cramped the off hours of our week.

All’s been well for morning drop off, but there’s been loud and heavy rain both before and after pick up, daily.  Mother Nature gave Ava and me a short opportunity to stick our feet in wet sand and stroll along the pier yesterday before sending in another beastly wave of clouds.

My girl and I are returning home without having shared a swim, but we did share a healthy dose of quality conversation.  That was most certainly worth a bad week of weather!

After spending five days rising for camp just thirty minutes later than we would for work and school, we’re both more than ready to sleep late and sleep in our own beds (unfortunately, I only have Sunday to do the former).  Creatures of habit that we are, we’re also anxious to get back to our routines.  For Ava, that’s looking ahead to Sunday with her dad; for me, that’s looking ahead to Sunday at the gym.  With a little luck, I’ll have something new to practice after Saturday’s class…assuming that what I tried to beat (rhythmically, that is) into my muscle memory this week doesn’t go on hiatus in front of Sifu.

One of these days I’ll take a break from work that’s actually restful.  That would require leaving the staff at home, of course.  It would likely require restraints of some kind, too. 🙂

Journalist and Sifu END_OF_DOCUMENT_TOKEN_TO_BE_REPLACED
This entry was posted on Friday, June 13th, 2014 at 2:39 pm and tagged with family, lifestyle, martial arts, rest, travel, weather and posted in Humor, sports, Uncategorized. You can follow any responses to this entry through the RSS 2.0 feed.
« Almost Nothing
Rolling Out & Rolling On »

One response to “Rhythm, Rest & Restraint”