A good day on the day job! We had a smooth production of an excellent interview on a book that’s making a wave or two inside the beltway. And it’s not every day I meet a former Supreme Court Justice. 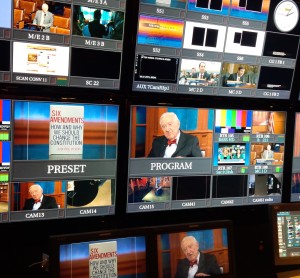 After yet another high-strung day in the never-ending week, taking a night off from kung fu, before Saturday training back in the guan, feels like a wise decision. I won’t be permitted back in Friday night class until June, anyway; I might as well use the continued restriction to my body’s advantage and get some rest. After I grocery shop. And pick up dry cleaning. And drive my boy around…. 🙂

Have a safe Friday night, U.S. friends and readers, and an enjoyable Saturday to those on the other side of the pond!

No Coffee, No Contract

Can anyone out there tell me why oh why it takes two and half hours to get two completely healthy adolescents, with no issues or questions, through an annual physical?  That was the pressing inquiry of a high-stress day that included the following: a thirty-two dollar ticket for inadvertently parking in a “passenger loading zone” outside the doctor’s office; giving my daughter the breakfast I’d been carrying around for myself for four hours to replace the school lunch she missed while waiting for her pediatrician to finish with her brother and two other patients; hydroplaning my way down Interstate 95 in a rain storm to get into the control room in time for a two o’clock taping of our weekly program; and a complete and total absence of coffee through all of it – perhaps the most ill-advised component of the whole morning.

The first third of the day did hold a few smiles, though.  I watched small children in a surprisingly overcrowded waiting room become entranced by a mural that it turns out was painted by some of the doctors attending them.  I thought that was a nice touch. 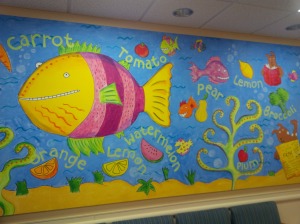 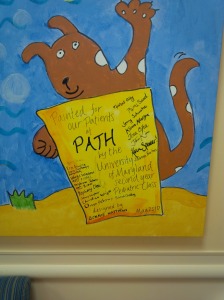 I also received an email from the slow-moving members of gym management asking if I have any objection to becoming an employee (rather than a contract worker).  I’m so beyond-anxious to get started teaching the kids’ kung fu class that I answered without asking what drawbacks there might be for me.  I’m fairly certain that if there are any, they’re financial.  In most industries, contract employees tend to be paid a higher hourly wage.

Of course, I couldn’t care less about the money – which is exactly why I told them I didn’t mind employee status.  It’s also why I know it’s what I should be doing with my time.

This sign was already on the door of the Kids Club the first time I set foot in the gym back in March.  It’s like they knew I was coming. 🙂

I’m struggling today, and it’s uncomfortable.  I don’t like being uncomfortable and tend to immediately try to alleviate or eliminate the feeling.  But I’m stuck on how to accomplish that – without quitting my job.

The trip took a lot out of me.  It wasn’t just the length of the days or the fight to stay on East coast time. The behavior of my colleague on Friday morning is weighing heavily on mind and spirit, and I’m finding it difficult to smile my way through it.  I’m beyond the incident itself, feeling acutely stifled instead by the culture of a company that will look the other way on that kind of behavior for a myriad of reasons – but only for certain members of the staff.

I’m so tired of the internal politics of the corporate world!   More than that, I’m tired of frequently feeling like human interaction in general requires some sort of politics, as in “the art or science concerned with guiding or influencing” behavior, policy, or opinion.  Clearly, I’ve been hanging around the movers, shakers and manipulators for far too many years.  Each day I spend away from the office not working makes it harder to come back to the bullshit.  (I just can’t parse words on that one.)

Speaking of days away, it felt so good to be home yesterday.  And by home, I mean in an exercise space big enough to accommodate me swinging a staff around like a whip just as much as I mean my house.  Ironically, even at the gym I had to deal with internal politics.

A trainer who often uses the yoga room to warm up her clients was annoyed because I was already in the space. She came into the room accompanied, exited and came back in alone to tell me that I needed to understand that I had to share the space with others.  I hadn’t said anything to her or her client but, “Hi.”  I have no problem with sharing… but management does.

“I was actually told I can only train in a room or space when I’m alone,” I answered pleasantly, completely empathizing with her frustration, having felt it myself when wanting to practice on a crowded gym day.  She was brought up short and stared at me for a second.  “Because what I’m doing involves a weapon,” I added.

The ah-ha light bulb went off in her head, and I went on to explain that if she has no other place to be with a client, I will leave the yoga room, just as I leave the squash courts when folks actually come to play squash.  That did it.  It was the first time in half a dozen times of making eye contact with the woman that she smiled at me.

Political battle averted.  If only they all could be that easy.

Waiting with fatigue and frustration to get back onto the plane I just got off of…. 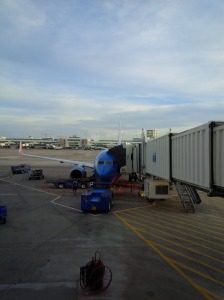 I was supposed to have to change planes in Denver for the one going to Baltimore, but then the airline gods decided to do a plane swap.  My connecting flight is on the very 737 that delivered me here.

Why, then, am I waiting, you may be wondering?Because the swapped-out flight crew isn’t here yet. Just the plane, the pilot and the passengers. This would be funny if I didn’t want so badly for this trip that I dreaded for a month to finally be over.

With all this swapping strangeness, my great concern is that my staff is either going to be left in Denver or shipped off to Kansas City, the original destination of the aircraft. In any case, my butt will either be in the yoga room or on the squash court with my spare about fifteen hours from now.

Prayer for an Unhappy Man

Back in 1999, Winnie Mandela backed out of a Saturday interview by satellite an hour after we were supposed to start.  The executive producer called in a crew on the weekend on my assurance that we had the interview locked down. The overtime costs for him were considerable at a time that the show was struggling for sponsorship, and I thought I was going to lose my job. The stress of that workday made it the worst of my career. But yesterday now runs a very close second.

Friday began with a crew member I’ve never worked with before ignoring explicit, repeated instructions from three different people (myself included) to wait at a specific place and time to be escorted to the interview site by our contact. It was important to the contact, the person facilitating our interviews with ten different authors; that’s all I needed to know to do as I was asked.  She, rather understandably, wanted to know why a person working for me hadn’t complied. Nothing prepared me for the answer I received when I politely asked him.

He unloaded on me with anger and profanity that all amounted to: I knew where I was going; how dare you three tell me what to do. It may be worth noting that the three of us telling him to wait were all women, but I digress. It was an assault that left me in a state of shock, shaking with tears of anger. Since I was alone on an elevator with him as he screamed at me and leaned across a dolly of equipment to get in my face, I thought it best to simply get away from him as soon as possible.

I spent the rest of the day speaking to him only when I needed to and with an unmistakable smile in my voice, but the need to walk on eggshells upset me – particularly in a 10-hour day elongated by the delayed flight of one of the authors and an impending 45-minute drive to a new hotel for our next show. My first impulse was to let the Sijeh in me have her moment with the man, put him in his place, take back my power. After all, I had the staff in the equipment van. I could’ve just brought it out and done a few dozen spins and stabs with it to make a point. But there’s no real way to intimidate the unbalanced, and even if there were, a pissing contest is unseemly for my age and gender. So I simply did the professional job I always do, willed the clock to move faster and said a prayer for an unhappy man.

Up next on this trip that can’t end soon enough is the beauty and eloquence of an award-wining author in the small bookstore he founded. Hopefully that will dull the memory of Friday’s craziness. 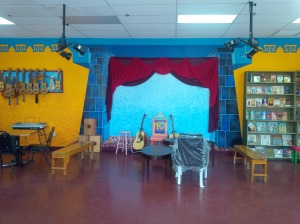 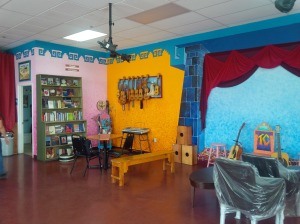 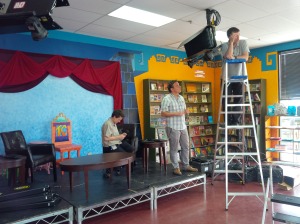 “You’re going to have to pay for this one,” the skycap said, looking at my staff in its carrying case like it might be an extra-long rifle in disguise.

“Why? I didn’t pay to check it when I flew with it in February,” I answered with an edge in my voice, realizing too late that the poor guy had no idea I didn’t want to be standing in front of him in the first place.

“All right. Take it easy.” He signaled for a superior while I replayed my response to him in my head. I didn’t think I’d been as indignant as he was acting, but whatever made him call for back-up was fine by me. After a bit more of him feigning offense and asking if I was that hard on my husband (I left that one alone!), I was off for almost five hours of three and four-year-old siblings taking turns keeping me awake with piercing screams and even more piercing kicks to the back of my seat. I was ready to sign them both up for my class by the time we landed. 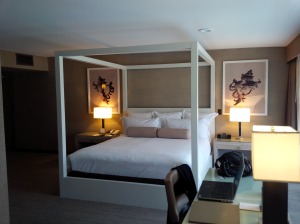 At the posh hotel with the unfortunately low ceiling (practicing spins would turn out to be tricky), I discovered that the Transportation Security Administration had been as threatened by my staff as the easily-offended skycap. When I unzipped the carrying case, there was a note wrapped ominously around my white wood baby notifying me that Big Brother had checked her out. I guess for safety’s sake I should’ve been happy, but I couldn’t help but feel a little creeped out. 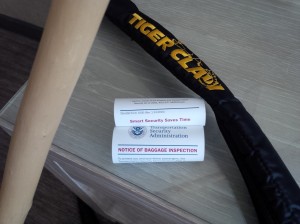 The travel day to the city where young women apparently don’t wear underwear (I would have snapped photos of several unattractive, unnecessary pants and shorts wedgies, but that seemed ill-advised for a number of reasons) ended with me pigging out in the kind of Mexican joint that I just can’t find at home.

All things considered, it was an entertaining start to a trip that has hints of impending hair pulling.  My boss arrived without the part of his luggage that holds his interview prep materials and his beloved cuff links; so tomorrow is going to be challenging.  Good thing I can finish enjoying today!